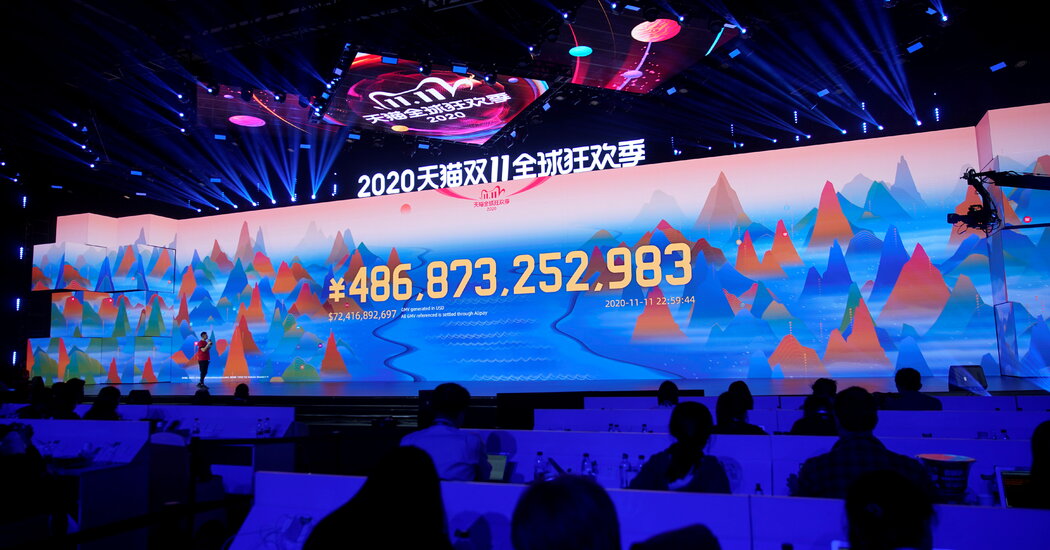 Singles Day used to be the biggest, most unabashed celebration of consumerism on earth: a 24-hour online retail extravaganza, kicking off with a confetti-filled gala and culminating in stupendous piles of riches for brands, celebrity pitchmen and Alibaba, the Chinese e-commerce titan at the center of it all.

This Singles Day, an annual Nov. 11 tradition, Chinese shoppers are still likely to buy a lot of stuff. But this year’s bash is looking a little more abashed.

The shopping holiday, which Alibaba invented over a decade ago, is evolving for a chastened new era for China’s internet industry, one that emphasizes fairness and responsibility and publicly spurns growth-at-all-costs excess. Past Singles Days were opportunities for Alibaba to showcase its latest innovations in getting people to spend more heedlessly. The big themes this year: green logistics, eco-friendly products and consuming “with care.”

Alibaba’s Tmall app is giving out “green vouchers” for discounts on energy-efficient and low-impact goods. The company’s logistics unit is offering to recycle packaging waste at 60,000 pickup stations across China. Alibaba says it will donate one yuan, or around 16 cents, to charity every time someone interacts during the event with a social media post about the company’s charitable ventures.

“We must leverage the power of 11.11 to encourage sustainable development and promote inclusiveness to consumers, merchants and partners across our ecosystem,” Alibaba’s chief marketing officer, Chris Tung, declared last month.

One mainstay of Singles Day has been Alibaba’s announcement of its blowout final sales figure, which invariably tops the previous year’s blowout number by a prodigious margin. When asked whether Alibaba would continue the tradition this year, Mr. Tung demurred, saying only that the company’s focus had shifted from pure sales growth to “sustainable growth.”

An Alibaba spokeswoman also declined to say this week whether the company would announce a sales figure after the event.

(Alibaba has already begun quietly rejiggering the meaning of its marquee Singles Day number: Last year, the sales figure it disclosed was the total value of orders not just during the 24 hours of Nov. 11 but also in the 10 days leading up to it. The metric Alibaba uses, gross merchandise volume, has no standard definition, giving the company latitude to choose the result it reports.)

Such are the times for Big Tech in China under Xi Jinping. As Mr. Xi prepares to seek a precedent-breaking third term as the country’s paramount leader, his government has put up new regulatory guardrails around Alibaba and other internet heavyweights, ending an exuberant period of unbridled boom times for the industry.

Alibaba’s co-founder Jack Ma was once a regular sight at the Singles Day evening gala, performing card tricks with Scarlett Johansson and posing onstage with Daniel Craig. This year, Mr. Ma has mostly disappeared from public view, prompting nervous speculation about his safety.

Last month, the South China Morning Post, the Hong Kong newspaper that Alibaba owns, cited unnamed sources who said Mr. Ma was visiting research institutions in the Netherlands. The trip was a sign that the authorities had not barred him from leaving China, as they sometimes do to people in connection with investigations or court proceedings.

That was reason enough for Alibaba’s shareholders to cheer, after a year in which the company’s stock price had dropped by about half.

Beijing has not let up in its efforts to make internet companies behave less rapaciously. Regulators have told companies to stop blocking links to one another’s services. They have ordered e-commerce sites not to bombard users with marketing messages ahead of Singles Day.

One way Alibaba says it is playing its part is by offering more support to the small businesses in China that sell on its platforms.

Wei Wei, 35, is a co-founder of Beats Per Minute 120, a brand of colorfully patterned socks. For small sellers like him, Singles Day has never been a guaranteed bonanza, he said. During the event, he said, Alibaba tends to direct shoppers on its apps toward big merchants, ones that can deliver the eye-popping sales growth that Alibaba likes to show off.

Mr. Wei said Alibaba had recently cut some fees for merchants and provided more guidance to small sellers, himself included. But what would really help, he said, are more customer eyeballs. And with Alibaba facing stiffer competition against platforms like Douyin, the Chinese version of TikTok, he knows that attracting those eyeballs is becoming more expensive.

Still, Mr. Wei is glad to be receiving support from Alibaba at all. Other small merchants, ones with dimmer business prospects, “they’re not being included,” he said.