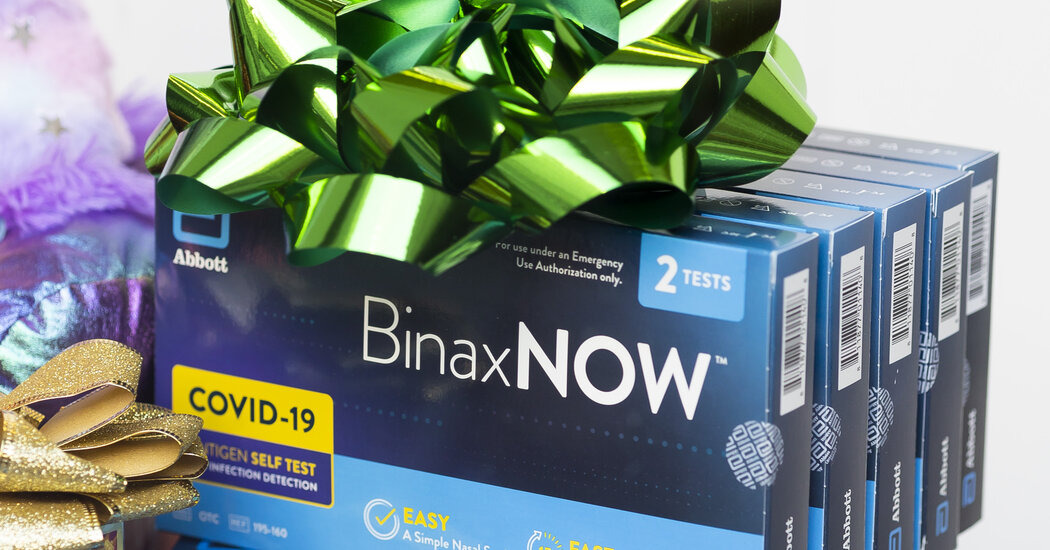 When Amir Blumenfeld was deciding what to buy for a Secret Santa gift exchange, he landed on something practical: an at-home Covid-19 testing kit. “What better gift is there than peace of mind?” Mr. Blumenfeld, a 38-year-old comedian, wrote in a direct message on Twitter.

At the heart of his quip was an urgent concern: Coronavirus cases are once again rising around the United States as the Delta variant has given way to Omicron, a highly contagious form of the virus. The surge has fueled demand for Covid tests ahead of the Christmas holiday as families seek ways to gather safely.

Some have braved hourslong lines at local testing sites to receive polymerase chain reaction tests, whose results, obtained in a laboratory, are considered the gold standard for detecting the virus. Many others have rushed to buy rapid at-home tests, depleting the stock at pharmacies and online stores. The frenzy for at-home testing has turned the kits into a commodity and even made them covetable holiday presents.

On Tuesday, President Biden announced a plan to fight the spread of Omicron, which includes distributing 500 million free rapid tests to the public, though it is not yet clear how that target number will be met. Various states, including New York, New Jersey and Massachusetts, have also laid out plans for increasing access to free rapid tests.

Abbott Laboratories, which made headlines back in August for destroying materials used in its tests, citing limited shelf life, said the company is currently making more than 50 million BinaxNOW rapid antigen test kits every month. In January, the company said, it will increase its output to 70 million a month.

“We actually maintained usable test components, many of which have been in short supply during the pandemic — such as reagent bottles, cardboard packaging, swabs, nitrocellulose strips and even paper labeling — so that we could have them in the event that we needed to scale back up, which is exactly what’s happening now,” John Koval, a company spokesman, said in a statement.

Pharmacies have seen a spike in demand for at-home tests, most of which cost between $7 and $24. Some are starting to place limits on how many each customer can buy.

“Following Thanksgiving and leading into the upcoming holiday week, we’ve seen an unprecedented increase in demand for rapid OTC Covid-19 tests across the country,” a spokesperson for Walgreens said. “Some stores may experience a temporary shortage in rapid OTC testing solutions.” The spokesperson added that a four-item purchase limit on test kits went into effect on Tuesday.

A representative for Amazon said: “At this time, we are experiencing inventory shortages on some Covid-19 tests due to increased demand” and that the company is working to “secure additional Covid-19 test inventory” from selling partners.

Similarly, a Rite Aid spokesperson said in a statement that “in many areas, demand is simply outpacing supply from manufacturers.”

A Target spokesperson said the company was working with vendors to meet the “strong” demand this holiday season. Representatives from Walmart and CVS said that online inventory for testing kits was limited. A spokesperson for Walmart said that the “inventory levels” in stores were substantial.

Justin Vavrick, the creator of NowInStock.net, a website that has been tracking the availability of at-home Covid tests since the spring, corroborated the companies’ statements.

“I think a lot of the inventory has been shifted to the stores,” Mr. Vavrick said in a phone interview. “In-store pickup is where you’re probably going to have the best success.”

Some people have been stockpiling testing kits, citing concerns about the Omicron variant. Amber Decker, 45, a genetic genealogist in Columbus, Ohio, said that she originally started accumulating a small stockpile of tests ahead of a trip she and her friends were planning for January. “I wanted to be able to ask everyone to test without asking each person to spend money on tests,” she said. So whenever she saw testing kits on sale, she bought them.

Ms. Decker currently has 13 individual tests and just ordered eight more. “We have used home tests a handful of times in the past when we had worrisome symptoms, but with Omicron, it looks like we will probably need to be using them more often,” she said. But cost of the tests “really adds up,” Ms. Decker added.

Last week, President Biden announced that private insurers will start reimbursing people in mid-January for at-home tests bought over-the-counter. But the upfront cost of the tests, and the labor involved in finding them, has limited their accessibility.

After visiting half a dozen different pharmacies in Champaign, Ill., and coming up empty-handed, Cynthia D’Angelo realized that the top gift of the season isn’t a ’54 convertible or an NFT, but a test kit.

Ms. D’Angelo, an assistant professor at the University of Illinois at Urbana-Champaign who is also immunocompromised, said that the university had offered faculty and staff free rapid testing since last summer. But after making plans to fly to California ahead of Christmas, she decided to look for a few rapid test kits of her own.

“I literally went to six different pharmacies, like all of the Walgreens and CVS in Champaign, and none of them had them,” Ms. D’Angelo, 40, said in a phone interview. “The first place I went, if I’d gotten there five minutes earlier, I would have gotten the last one, but I literally saw someone pick the last one off the shelves.”

Fortunately, a friend who lives an hour away has offered her a few tests.

“I am paying her back,” Ms. D’Angelo said, “but definitely a gift that she was able to get them and bring them to me. And I will be sharing them with my family in California.”