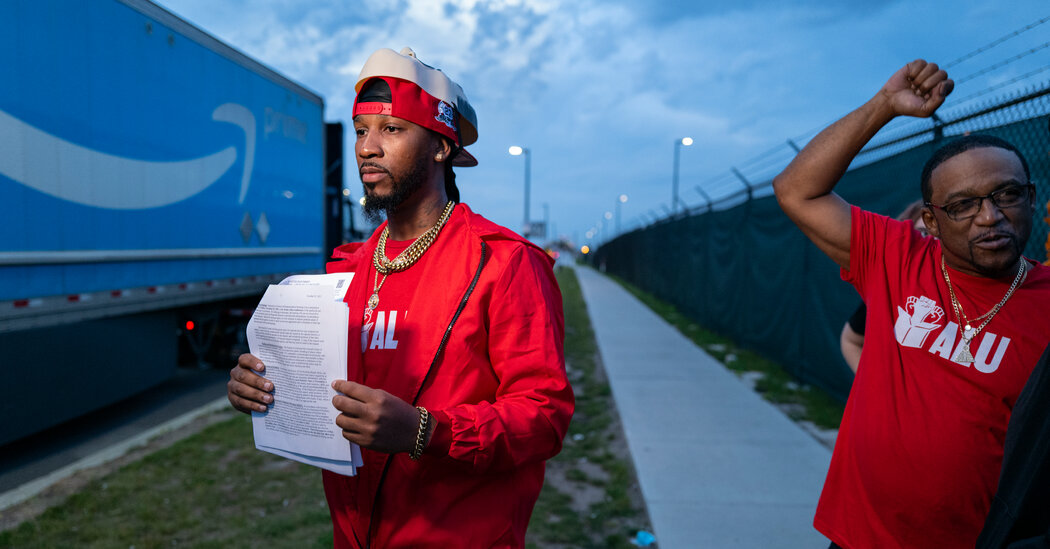 Workers at four Amazon warehouses on Staten Island have withdrawn their request for a union vote, throwing into doubt the future of an organizing push that could have led to the second election at an Amazon workplace in less than a year.

The group asked on Friday to withdraw its petition for an election, and the National Labor Relations Board approved.

Christian Smalls, a former Amazon employee leading the effort, said the board had told his group that it needed more signatures to demonstrate that enough workers were interested in holding an election. He said the group planned to refile once it got more workers signed on.

Kelly Nantel, an Amazon spokeswoman, said in a statement that the company’s “focus remains on listening directly to our employees and continuously improving on their behalf.”

The unionization push reflected the growing labor challenges that Amazon and other large employers face as the pandemic has given workers a stronger hand for the first time in decades. But the setback for labor organizers in Staten Island shows how difficult it remains to form a union at the country’s biggest companies, particularly Amazon. The company promotes its average starting wage of $18 an hour, and has aggressively pushed back against past efforts through signage in buildings and mandatory meetings with workers.

Mr. Smalls’s effort has been organized not by an established union but instead by a group of current and former Amazon workers aiming to form an independent organization, the Amazon Labor Union. The group spent six months collecting signatures from workers requesting a vote and submitted those signatures to the labor board last month.

The board determined that the signatures represented at least 30 percent of the workers of the proposed bargaining unit, the threshold required. The decision laid the groundwork for an election next spring.

Typically unions file with far more signatures than the 30 percent threshold, labor experts say, because support historically erodes over the course of the campaign. Amazon has said for weeks that it did not believe that the threshold had been reached, saying more people worked at the buildings than the Amazon Labor Union initially indicated. The organizers filed to represent 5,500 workers, but Amazon said in documents submitted to the labor board that the facilities employed more than 9,600.

The Amazon Labor Union continued recruiting workers, and this week put up a sign offering “Free Weed and Food From A.L.U.” by the tent it set up near a bus stop by the warehouses. Mr. Smalls said he had delivered 400 additional signatures to the labor board after it initially accepted its petition, though he had since learned that the agency determined he needed even more.

He also said Amazon had submitted payroll data to the labor board indicating that the company believed half the people who had signed cards for the union no longer worked for the company. Ms. Nantel declined to comment.

The New York Times reported this year that turnover at the company was about 150 percent a year even before the pandemic increased attrition across the labor market.

Employee churn is high. The company conducted a hiring surge in 2020, signing up 350,000 workers in three months offering a minimum wage of $15 an hour and good benefits. But even before the pandemic, Amazon was losing about 3 percent of its hourly associates each week — meaning its turnover was roughly 150 percent a year.

Buggy systems caused awful mistakes. Amazon’s disability and leave system was a source of frustration and panic.  Workers who had applied for leaves were penalized for missing work, triggering job-abandonment notices and then terminations.

Strict monitoring has created a culture of fear. The company tracks workers’ every movement inside its warehouses. Employees who work too slowly, or are idle for too long, risk being fired. The system was designed to identify impediments for workers. Though such firings are rare, some executives worry that the metrics are creating an anxious, negative environment.

There is rising concern over racial inequity. The retail giant is largely powered by employees of color. According to internal records from 2019, more than 60 percent of associates at JFK8 are Black or Latino. The records show Black associates at the warehouse were almost 50 percent more likely to be fired than their white peers.

The organizing has focused on a massive Staten Island warehouse, known as JFK8, that serves as Amazon’s key pipeline to New York City. It employs more than 5,000 people. Over time, the organizers extended their push to include three smaller Amazon facilities in the same industrial park.

Workers at JFK8 have accused Amazon of illegally interfering with their organizing rights. Staff lawyers at the National Labor Relations Board have found some merit to further pursue at least three of their cases and is still investigating several others, the agency said.

In April, Amazon defeated a union election at its warehouse in Bessemer, Ala., in the gravest union threat that the company had faced in its history. The workers’ effort attracted visits from Senator Bernie Sanders and a tacit nod of support from President Biden. Some of Amazon’s anti-union measures prompted a labor board official to recommend that the results be thrown out and the election rerun, a decision that Amazon has said it would appeal.

Amazon has almost 1.5 million employees and wants to hire hundreds of thousands of seasonal and permanent hourly workers in the United States this fall. Brian Olsavsky, the company’s finance chief, said last month that the greatest constraint on its operations was not the supply chain or warehouse space but rather its ability to hire and keep enough workers as it expands.

For example, he said, sometimes Amazon ships packages over longer distances, or through faster, more expensive methods, if enough workers are not available to process an order at a warehouse close to a customer.

Amazon has raised wages and offered bonuses to attract workers in the tight labor market, and Mr. Olsavsky told investors to expect labor challenges to cost the company $4 billion in the holiday quarter alone.