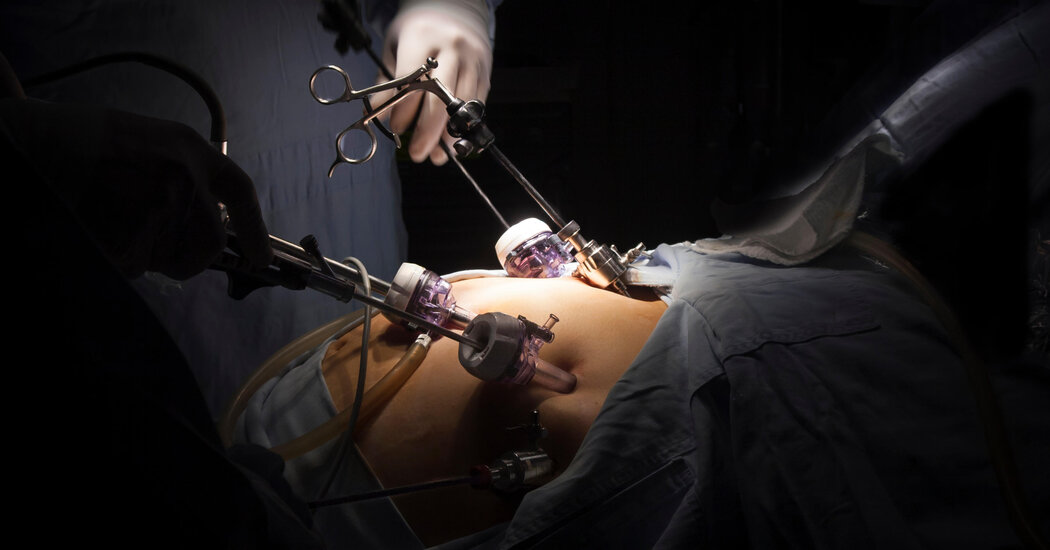 One in four American adults has fatty liver disease caused by obesity, not drinking, and there is no medical treatment for it. Doctors say the only way to keep it in check is to lose weight and eat a healthier diet.

Now a new study reports that bariatric surgery, in addition to helping with weight loss, can protect the liver. The findings were striking: Of a group of more than 1,100 patients who had an aggressive form of fatty liver disease, those who had weight-loss surgery cut their risk of advanced liver disease, liver cancer or related death by almost 90 percent over the next decade.

Only five of the 650 patients who had bariatric surgery later developed one of those severe liver outcomes, compared with 40 of 508 patients who did not have the procedure.

The weight-loss surgery patients were also at significantly lower risk for cardiovascular disease, a finding that is consistent with earlier research. They were 70 percent less likely to experience a cardiac event, stroke or heart failure, or to die of heart disease, according to the study published Thursday in JAMA.

Dr. Ali Aminian, the director of the Cleveland Clinic’s Bariatric and Metabolic Institute and the study’s lead author, said that in all likelihood weight loss had stopped the disease in its tracks.

“Obesity is the main driver of the fatty liver — it all starts with obesity,” Dr. Aminian said. “When we have excess fat that accumulates in the liver, it causes fatty liver; then inflammation comes and gets worse and then scar tissue forms and leads to cirrhosis.

“When a patient loses weight, fat goes away from everywhere, including the liver; inflammation subsides, and some of the scar tissue can reverse and get better,” Dr. Aminian continued. “Weight loss is the main factor here.”

The results were remarkable, said Dr. Steven Nissen, chief academic officer of the Heart and Vascular Institute at the Cleveland Clinic and the study’s senior author.

The post-surgical disease result “was the lowest I’ve seen in 30 years of doing studies, an 88 percent reduction in progression to advanced liver disease,” he said.

The observational study reviewing cases at the Cleveland Clinic over 12 years did not establish a causal link to lower risks of severe liver or heart conditions from weight-loss procedures, but the findings add to mounting evidence that bariatric surgery can provide health benefits beyond weight loss. About 100 million American adults are dangerously obese; around 250,000 undergo bariatric operations each year.

The surgery carries serious risks, however. Sixty-two of the 650 weight-loss surgery patients in the study group developed serious complications after the operation, and four of them died within a year of having the operation.

The most commonly performed procedure is called a sleeve gastrectomy. Only one-fifth of the patients studied in this report had that procedure. The vast majority had Roux-en-Y gastric bypass surgery.

More than 40 percent of American adults struggle with obesity. About 75 percent have nonalcoholic fatty liver disease, which is often a silent condition with no obvious symptoms. But one in four or five will develop an aggressive form of the disease called nonalcoholic steatohepatitis, or NASH, which causes fibrosis of the liver, and one in five of those individuals will develop cirrhosis, or scarring of the liver, for which the only cure is a liver transplant.

There are no approved drugs or therapies available for nonalcoholic fatty liver disease. Doctors generally advise patients to lose weight and to switch to a healthier diet in an effort to reduce fat, inflammation and fibrosis in the liver, a vital organ that turns food and drink into nutrients and filters harmful substances from the blood.

Obese patients who undergo bariatric surgery generally lose up to 25 percent of their body weight, much more than patients who diet to lose weight. After the surgery, they often require less medication to keep conditions like Type 2 diabetes, high blood pressure and high cholesterol under control.

The new study is not definitive, however. It was a retrospective observational study that compared the long-term outcomes of 650 bariatric surgery patients with 508 closely matched patients who did not have surgery. As such, it was not a randomized controlled trial of the kind considered the gold standard in medicine, which randomly assigns patients with similar characteristics to either an intervention arm or a placebo.

One concern in studies like these is that patients who elect weight-loss surgery may be inherently different than those who do not. They may be more motivated; they have the health coverage or the means to cover the procedures; and they are healthy enough that surgeons do not turn them away.

In this case, however, Dr. Nissen said, the benefit was so striking that “even if it’s wrong by a factor of twofold, it still means the risk is dramatically reduced.”

The study reviewed Cleveland Clinic cases of 1,158 obese patients whose liver biopsies from 2004 to 2016 showed they had advanced nonalcoholic fatty liver disease with fibrosis. Women represented more than 60 percent of the patients; the average age was just under 50; and the median body mass index was 44, which is considered dangerously overweight. Heart disease was also reduced after weight-loss surgery, as earlier studies have shown: Some 8.5 percent of those who had bariatric surgery had a cardiac event, compared with 15.7 percent of those who did not have surgery.

“Fatty liver disease is really the most important disease that most Americans know essentially nothing about,” Dr. Nissen said. “It is now a more important cause of liver failure than alcohol is. And with the obesity epidemic, this disease is really increasing at a frightening rate.”