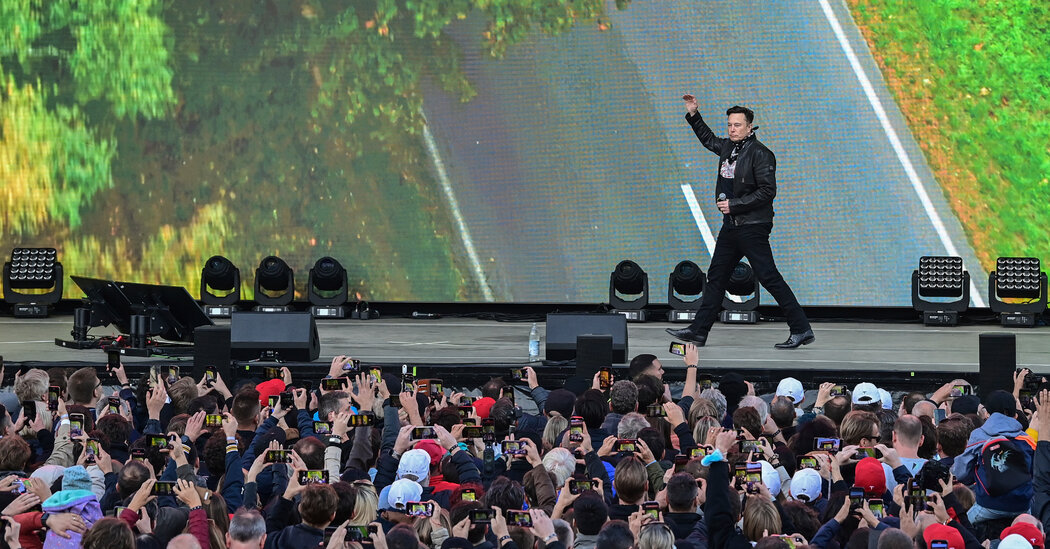 Elon Musk may have already been compelled to sell a sizable portion of his Tesla shares even if he hadn’t issued an unusual Twitter pledge over the weekend.

Mr. Musk on Saturday polled Twitter users as to whether he should sell 10 percent of his stake in his company. The poll appeared to be a response to a Democratic proposal to tax the unrealized gains of billionaires. “Much is made lately of unrealized gains being a means of tax avoidance, so I propose selling 10% of my Tesla stock,” he tweeted. Mr. Musk said he was raising the question because he does not take a cash salary as Tesla’s chief executive, and therefore wouldn’t have any way to pay a large tax bill without selling some of his Tesla shares, which make up the vast majority of his wealth.

Mr. Musk wrote in a follow-up tweet that he would “abide by the results of this poll, whichever way it goes.”

He closed the poll on Sunday, after nearly 3.5 million votes had been cast, with 58 percent voting for sell. Mr. Musk hasn’t confirmed what he will do, but after closing the poll, he tweeted, “I was prepared to accept either outcome.”

Either way, Mr. Musk may soon have needed to sell a big chuck of his shares. He holds nearly 23 million stock options that were awarded in 2012. Those options have since vested and will expire in August. Most stock grants allow executives to avoid paying taxes for years, and perhaps forever, as long as they don’t sell the shares they get from converting the option.

But Brian Foley, an executive compensation consultant, says because of the size of Mr. Musk’s grant and the way it was structured, it’s likely that much of his 2012 options don’t qualify for the preferential tax treatment. That means Mr. Musk would owe income taxes when he exercises the grant, which at current prices would be worth just under $30 billion. Mr. Musk’s tax bill could top $10 billion, depending on what percentage of the options don’t qualify for the preferential treatment.

“They are a ticking tax time bomb,” Mr. Foley said of Mr. Musk’s stock options. “Offhand I can’t think of any way for him to get around paying the tax.”

What’s more, Mr. Musk may need to sell even more shares than what it would take to pay his tax bill. He owns 17 percent of Tesla’s shares, which at its current stock price would be worth about $200 billion. That means his weekend tweets are a pledge to sell roughly $20 billion worth of Tesla’s shares.

The potential sale could roil Tesla’s stock at a time when many analysts say it is already overvalued. The company’s market value recently crossed $1 trillion, making it only one of five U.S. publicly traded companies to be worth that much.

Nonetheless, James Cox, a professor at Duke University law school and an expert in securities laws, said it might be hard for Mr. Musk to go back on his Twitter pledge. “It’s a no-win situation,” Mr. Cox said. “In the securities law, the problem is this could be seen as a misrepresentation that was meant to mislead if another shareholder sold on Musk’s tweet.”

But Mr. Cox said it would be a hard lawsuit to win, because chief executives are allowed to make statements and change their minds, as long as they meant what they said when they said it.

It would not be the first time Mr. Musk has gotten into trouble over his tweets. In late 2018, he and Tesla settled a lawsuit by the Securities and Exchange Commission, without admitting guilt, for tweeting about a potential sale of Tesla that never happened. Mr. Musk was also sued for defamation in 2018 after calling a diver who had helped rescue children stuck in a cave in Thailand a “pedo guy” on Twitter. Mr. Musk won the suit.

Daniel Ives, a stock analyst at Wedbush Securities who follows Tesla, called Mr. Musk’s latest Twitter pledge “bizarre,” but said he thought given Tesla’s prospects and the investor enthusiasm for the company that the stock, which is up 67 percent this year to a recent $1,222, would keep climbing, even with Mr. Musk cashing out a portion of his holdings.

“Musk was likely to sell some of his Tesla stock before year end, but no one ever imagined there would be a Twitter poll translating into a 10 percent sale of his ownership,” Mr. Ives said. “This weekend’s Twitter poll was a strange one even for Elon.”