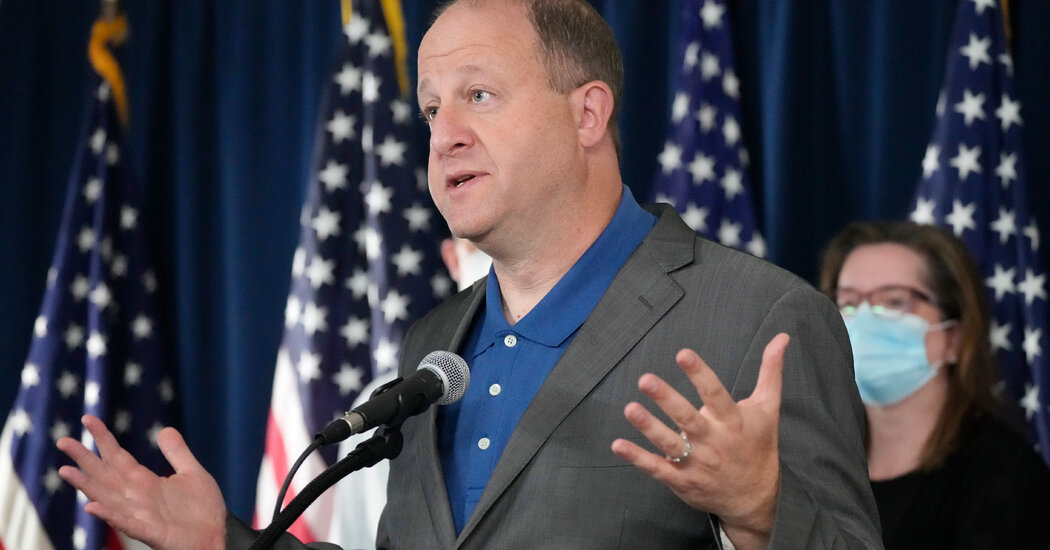 As federal regulators consider a request to expand eligibility of Pfizer-BioNTech’s coronavirus vaccine boosters to all adults, three states decided this past week to broaden access on their own.

Colorado, New Mexico and California are allowing adults to seek out boosters, provided individuals are at least six months past the second dose of the Pfizer-BioNTech or Moderna vaccines, or two months past the single-dose Johnson & Johnson vaccine.

“I’ve been very frustrated with the convoluted messaging out of the C.D.C. and the F.D.A.,” said Gov. Jared Polis of Colorado on Sunday on the CBS show “Face the Nation,” referring to the Centers for Disease Control and Prevention as well as the Food and Drug Administration.

Federal regulators have said that adults who received the Pfizer-BioNTech or Moderna vaccines are eligible for a booster if they are 65 or older, or if they are at increased risk because of medical conditions or where they work or live. People who got the Johnson & Johnson shot, which is available only to adults, are eligible. Those getting boosters can select any of the three vaccine brands.

On Tuesday, Pfizer and BioNTech asked the F.D.A. to expand eligibility for their boosters to all adults. If the regulators sign off on that request, it would make official what health authorities say they already see happening frequently — that many people appear to be getting boosters whether or not they are technically eligible. In mid-August, President Biden announced plans to make boosters available to all adults, but the beginning of the campaign was delayed after regulators insisted they needed more time to review data.

Mr. Polis signed an executive order this week on boosters, citing the significant spread of the virus across Colorado. As of Saturday, the state’s daily average of hospitalizations had increased 13 percent over the past two weeks to about 1,500, according to a New York Times database.

As winter bears down, Mr. Polis said he wanted to safeguard residents as well as ski tourists.

“Everybody should get the booster after six months,” he said, emphasizing its ability to help with personal protection. “That’s why my parents got it,” he added, as did he.

The State of Vaccine Mandates in the U.S.

A growing number of employers, universities and businesses are now issuing some form of a vaccine requirement. Here’s a closer look.

A growing body of early global research has shown that the vaccines available in the United States have remained highly protective against the disease’s worst outcomes over time.

A number of published studies show that their protection against infection, with or without symptoms, has fallen. Public health experts say it does not mean the vaccines are not working. But the significance of waning effectiveness — and whether it suggests that all adults should be eligible for a booster — is still up for debate.

Dr. Scott Gottlieb, a former head of the F.D.A. who now sits on Pfizer’s board, was blunt on “Face the Nation” in his criticism of the Biden administration’s approach to booster recommendations. “I think the confusing message around the boosters may end up being one of the biggest missed opportunities in this pandemic,” he said.

“Anyone who’s eligible for a booster, and most Americans probably are eligible at this point, should be going out and seeking it,” he added.

And on “Fox News Sunday,” Dr. Vivek Murthy, the U.S. surgeon general, tried to walk a line between acknowledging the moves of those three states and defending the slower approaches by federal regulators.

“What they’re going to do is take a close look at the data,” he said of the F.D.A., to assure that the booster is safe and effective for people currently not eligible for it.

He continued: “The bottom line is that millions of people can get boosted right now and we want them to get boosted, because that will both extend and enhance the protection that they’ve already been getting from the vaccine.”