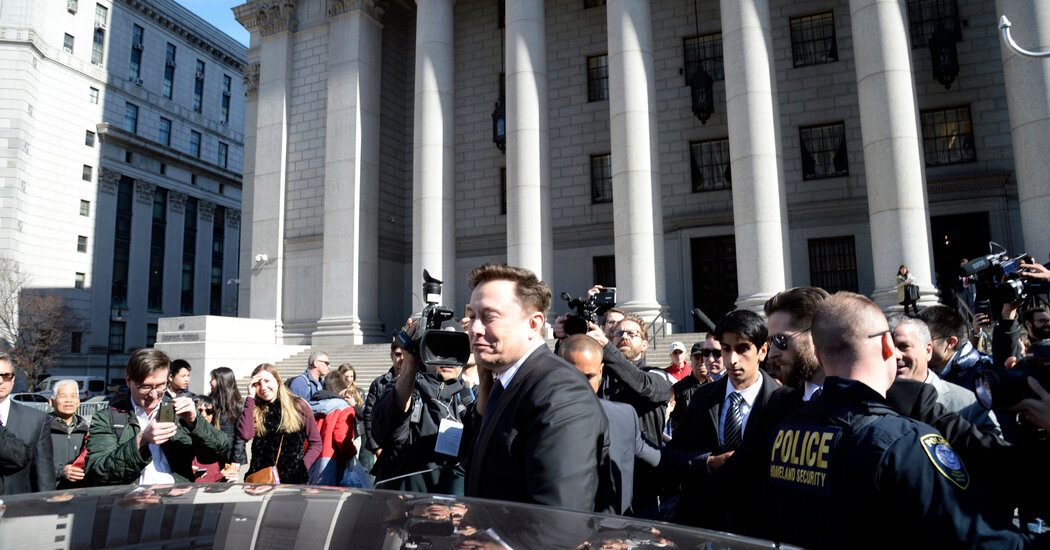 On Monday, JPMorgan Chase sued Tesla in federal court, seeking $162 million that the bank says the electric automaker owes it under a stock options contract the companies signed in 2014. At the heart of the dispute is a provision in the contract that allows JPMorgan to tweak its details following any “extraordinary events” at Tesla.

The bank is claiming that an Aug. 7, 2018, tweet — in which Mr. Musk, Tesla’s chief executive, said he had “funding secured” to take Telsa private at $420 a share — fit the bill because it significantly lowered Tesla’s share price. Tesla’s leaders disagree.

JPMorgan’s lawsuit says that Tesla sold JPMorgan stock warrants in 2014 “as part of a larger capital markets transaction.” According to the agreement, if Tesla’s stock was at or above a certain price on the day the options expired seven years later, it would have to pay JPMorgan a certain amount of money — the difference between the actual share price on that date and the so-called “strike price” that the two sides had set.

The strike price was initially set at just over $560 a share. Then came Mr. Musk’s tweet about a deal to take Tesla private at $420 a share — a significant premium over the company’s stock price the time. The tweet initially sent Tesla’s share prices soaring. But they sank when it quickly became clear that no such deal had been reached.

Tesla executives scrambled to explain the tweet to shareholders and regulators. Mr. Musk and Tesla later paid $20 million each to settle a Securities and Exchange Commission case over the matter, and he agreed to step aside from his role as chairman for three years.

Just after the crisis began, JPMorgan wanted to reset the strike price in its contract. Ten days after Mr. Musk’s tweet, the bank told Tesla it had reset the price to $424 a share. A week later the bank raised the price slightly, to $484.35 a share.

Tesla did not respond to the changes until early 2019, when its lawyers wrote to JPMorgan claiming that the bank’s strike price adjustments had been “unreasonably swift and represented an opportunistic attempt to take advantage of changes in volatility in Tesla’s stock.”

The two sides were still in a deadlock in 2020, when Tesla’s five-for-one stock split prompted JPMorgan to adjust the strike price a third time, lowering it to $96.87.

Tesla never accepted any of these changes. Starting in June this year, Tesla paid JPMorgan only the “undisputed” portion of the two sides’ agreement. (Tesla shares traded for more than $600 for much of that month; the stock was worth $1,013.39 a share at Monday’s close.)

“We have provided Tesla multiple opportunities to fulfill its contractual obligations, so it is unfortunate that they have forced this issue into litigation,” a spokeswoman for the bank, Tasha Pelio, said in an email to The New York Times.

Mr. Musk and Ryan McCarthy, an attorney for Tesla, did not respond to messages seeking comment on Tuesday.