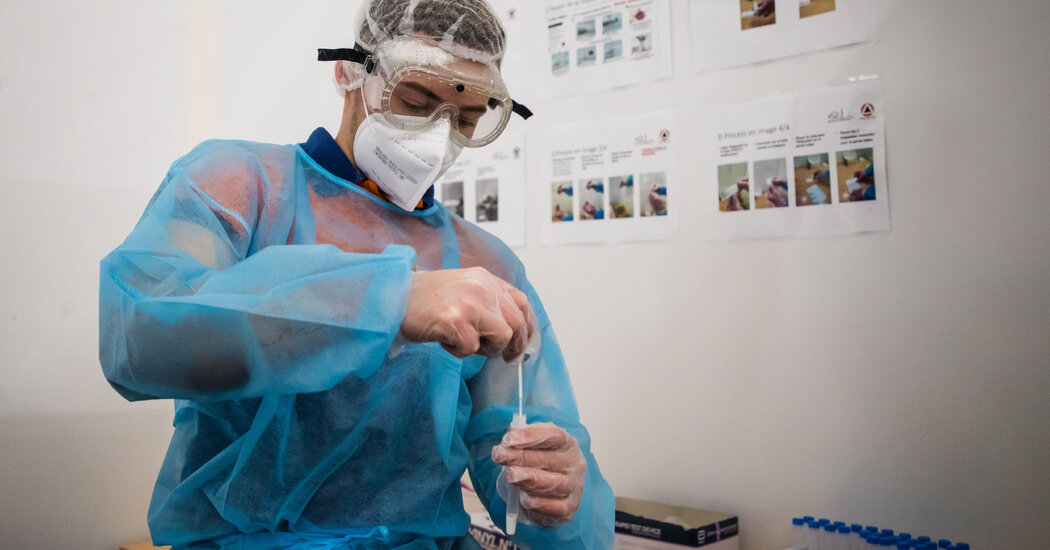 In recent days, scientists have reported that a hybrid of the Omicron and Delta coronavirus variants has been popping up in several countries in Europe. Here’s what is known so far about the hybrid, which has picked up the Frankensteinian nicknames of Deltamicron or Deltacron.

How was it found?

In February, Scott Nguyen, a scientist with the Washington, D.C., Public Health Laboratory, was inspecting GISAID, an international database of coronavirus genomes, when he noticed something odd.

He found samples collected in France in January that researchers had identified as a mix of Delta and Omicron variants. In rare cases, people can be infected by two coronavirus variants at once. But when Dr. Nguyen looked closely at the data, he found hints that this conclusion was wrong.

Instead, it looked to Dr. Nguyen as though each virus in the sample actually carried a combination of genes from the two variants. Scientists call such viruses recombinants. When Dr. Nguyen looked for the same pattern of mutations, he found more possible recombinants in the Netherlands and Denmark. “That led me to suspect that these might be real,” he said in an interview.

Dr. Nguyen shared his findings in an online forum called cov-lineages, where scientists help one another track new variants. These collaborations are essential to double-check possible new variants: A supposed Delta-Omicron recombinant found in January in Cyprus turned out to be a mirage resulting from faulty laboratory work.

“There’s a lot of proof that’s needed to show that it is real,” Dr. Nguyen said.

It turned out that Dr. Nguyen had been right.

“That day, we rushed to double-check what he suspected,” Etienne Simon-Loriere, a virologist at the Institut Pasteur in Paris, said in an interview. “And, yeah, we quickly confirmed that it was the case.”

Since then, Dr. Simon-Loriere and his colleagues have found more samples of the recombinant virus. They eventually obtained a frozen sample from which they successfully grew new recombinants in the laboratory, which they are now studying. On March 8, the researchers posted the first genome of the recombinant on GISAID.

Where has the new hybrid been found?

In a March 10 update, an international database of viral sequences reported 33 samples of the new variant in France, eight in Denmark, one in Germany and one in the Netherlands.

As first reported by Reuters, the genetic sequencing company Helix found two cases in the United States. Dr. Nguyen said he and his colleagues were taking a fresh look at some database sequences from the United States in an effort to find more cases.

The thought of a hybrid between Delta and Omicron might sound worrisome. But there are a number of reasons not to panic.

“This is not a novel concern,” Dr. Simon-Loriere said.

For one thing, the recombinant is extremely rare. Although it has existed since at least January, it has not yet shown the ability to grow exponentially.

Dr. Simon-Loriere said that the genome of the recombinant variant also suggested that it wouldn’t represent a new phase of the pandemic. The gene that encodes the virus’s surface protein — known as spike — comes almost entirely from Omicron. The rest of the genome is Delta.

The spike protein is the most important part of the virus when it comes to invading cells. It is also the main target of antibodies produced through infections and vaccines. So the defenses that people have acquired against Omicron — through infections, vaccines or both — should work just as well against the new recombinant.

“The surface of the viruses is super-similar to Omicron, so the body will recognize it as well as it recognizes Omicron,” Dr. Simon-Loriere said.

Scientists suspect that Omicron’s distinctive spike is also partly responsible for its lower odds of causing severe disease. The variant uses it to successfully invade cells in the nose and the upper airway, but it doesn’t do so well deep in the lungs. The new recombinant may display the same penchant.

Dr. Simon-Loriere and other researchers are conducting experiments to see how the new recombinant performs in dishes of cells. Experiments on hamsters and mice will provide more clues. But those experiments won’t yield insights for several weeks.

“It’s so fresh that we don’t have any results,” Dr. Simon-Loriere said.

Where do recombinant viruses come from?

People are sometimes infected with two versions of the coronavirus at once. For example, if you go to a crowded bar where several people are infected, you might breathe in viruses from more than one of them.

It’s possible for two viruses to invade the same cell at the same time. When that cell starts producing new viruses, the new genetic material may be mixed up, potentially producing a new, hybrid virus.

It’s probably not uncommon for coronaviruses to recombine. But most of these genetic shuffles will be evolutionary dead ends. Viruses with mixtures of genes may not fare as well as their ancestors did.

Are we really calling it Deltacron?

For now, some scientists are referring to the new hybrid as the AY.4/BA.1 recombinant. That will probably change in the weeks to come.

A coalition of scientists has come up with a system for formally naming new lineages of coronaviruses. They give recombinant viruses a two-letter abbreviation starting with X. XA, for example, is a hybrid that arose in December 2020 from a mixture of the Alpha variant and another lineage of coronaviruses called B.1.177.

But on March 8, this process became muddled when a second team of French researchers posted a study online with their own analysis of the same recombinant. Like Dr. Simon-Loriere and his colleagues, they isolated the virus. But in the title of their study, which has not been published yet in a scientific journal, they called it Deltamicron.

Dr. Nguyen criticized the team for not crediting Dr. Simon-Loriere’s team for originally sharing the first recombinant virus genomes. He also criticized the scientists for unleashing lurid nicknames for the recombinant that were immediately picked up in news articles and social media posts claiming that it was a hoax or had been produced in a lab.

It remains to be seen how well the name XD sticks.