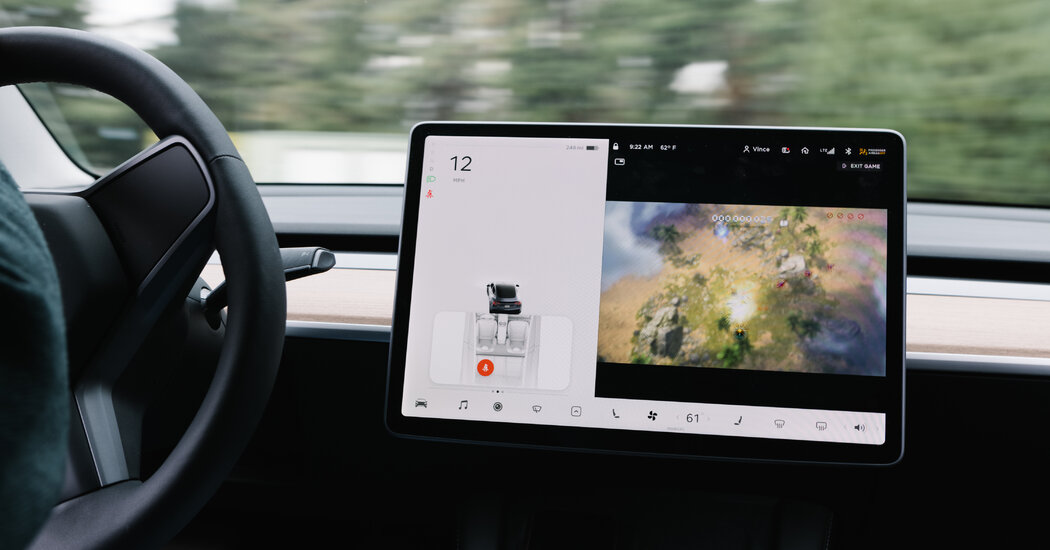 The federal government’s top auto safety regulator said on Wednesday that it had begun looking into a new feature in Tesla cars allowing drivers to play video games on a large touch-screen while the vehicles are moving.

“We are aware of driver concerns and are discussing the feature with the manufacturer,” the National Highway Traffic Safety Administration said in a statement.

The video game feature was included in a software update Tesla released over the summer. The agency issued its statement after The New York Times reported that auto experts were concerned that the games could pose a safety risk by distracting drivers.

News of the safety agency’s inquiry was first reported by Bloomberg News.

Tesla has offered video games on its touch-screens, which dominate the dashboards of its cars and are used to control many aspects of the vehicles, for several years. But the original set of games could only be played while the car was in park. An over-the-air update this summer added solitaire and two other games that can be played by a driver or by a passenger in full view of the driver, raising questions about safety and the potential for distracting drivers from the road.

“Distraction-affected crashes are a concern, particularly in vehicles equipped with an array of convenience technologies such as entertainment screens,” the safety agency said. “The Vehicle Safety Act prohibits manufacturers from selling vehicles with design defects posing unreasonable risks to safety.”

Some safety experts have criticized Tesla’s Autopilot system, which can steer, slow, and accelerate a car on its own and has few safeguards to ensure drivers keep their hands on the steering wheel and eyes on the road. At least 12 traffic deaths have occurred since 2016 involving Tesla vehicles operating in Autopilot mode where hands-free driving and drivers’ inattention were cited as likely causes, according to data from the safety agency.

Tesla appeared to be aware the new games can be played while the car is in motion. A warning shows up on the screen before the game starts that reads, “Solitaire is for everyone but playing while the car is in motion is only for passengers.” The system asks for confirmation that the person seeking to play the game is a passenger, but there is nothing preventing drivers from clicking the button and starting a game.

The company did not respond to a request for comment.