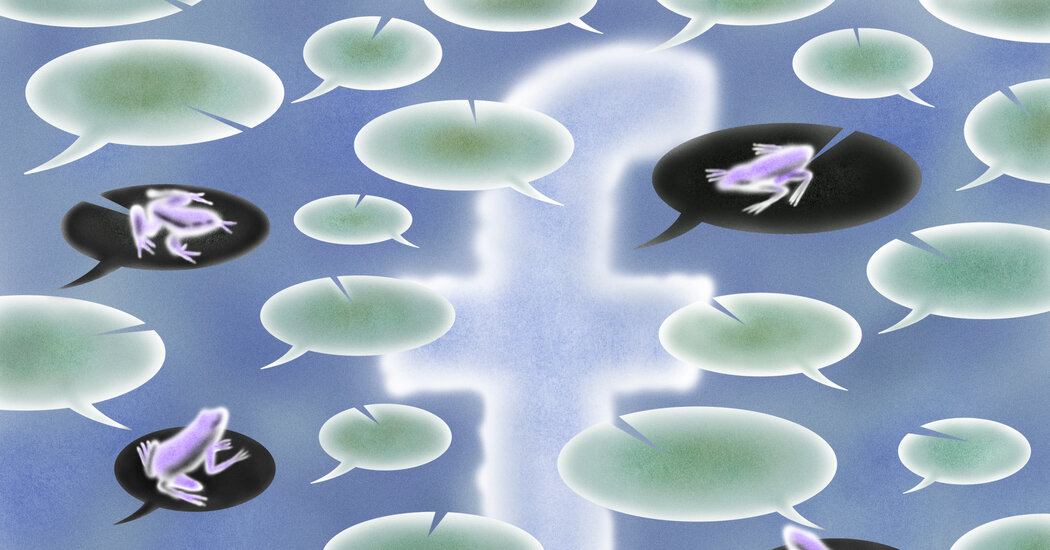 We know that gatherings of humans on the internet can be either snarky and insensitive or welcoming and informative. On Tech is hosting a virtual event this week for New York Times subscribers to talk over what makes healthy online communities tick and how to get more of them.

Bilowitz is a co-founder of a Facebook group called Vaccine Talk, which describes itself as an “evidence-based discussion forum” for people with varying beliefs about vaccinations to better understand one another.

You might imagine raging shout fests, but I’ve been watching Vaccine Talk since I read about the group in The Washington Post, and I’ve mostly seen discussions that are empathetic, civil and nuanced. I’ve gotten teary reading the compassionate replies to someone worried about Covid vaccinations harming a loved one recovering from cancer.

Vaccine Talk isn’t perfect, and the group’s work is fraught. Facebook acknowledges that Vaccine Talk is the kind of group that it wants on its site, but Bilowitz told me that the group’s overseers are constantly worried about being shut down. (More on that in a minute.)

In my ideal world, the best online community hosts would be as famous as Mark Zuckerberg. Consider this newsletter one step to bring them more notice.

Vaccine Talk is a time-consuming labor. Bilowitz, who is a parent and works in real estate, said that she spent roughly 10 to 15 hours a week on the Facebook group. I asked why she devoted so much time to a volunteer role in which she’s occasionally yelled at by strangers.

“It is extremely rewarding when people tell us that the group helped them,” Bilowitz said. “We’re not here to preach at people, but when people are hesitant about vaccines and they find information that helps them become confident in their decision — honestly, that is the No. 1 reason why we do this.”

The irony of building great online communities is that if they’re working, they can seem effortless. They definitely are not. Bilowitz said the overseers of Vaccine Talk, like others who run online groups, worked hard to forge a healthy culture and design and enforce codes of conduct.

Vaccine Talk started more than four years ago and focused mostly on childhood vaccines like measles. The initial idea was to be a place for anything-goes conversations. “That did not work,” Bilowitz said. “It was not a civil discussion forum.” Many people — particularly those in the vast middle between strongly pro- or anti-vaccine views — tuned out.

Now, rules require people to be respectful, and the group offers tips on how to effectively back up claims with evidence. “Excessive complaining” about the group or how it’s run is off limits. Nearly 30 moderators scattered across multiple time zones keep a close watch on the comments and approve newcomers who want to join the group, which has about 77,000 members.

Bilowitz knows that some people feel stifled by Vaccine Talk’s guardrails, but she considers them essential for productive conversation.

The dangers of false information about vaccines complicate the group’s work and Facebook’s. To try to counter misinformation on its site, Facebook has rules against posting information on vaccines that fact-checking groups or health authorities consider false. But this poses a challenge to groups like Vaccine Talk, where people may sometimes post misinformation to get help debunking it — something that is allowed in Facebook’s rules.

Bilowitz said that twice this year, Facebook disabled Vaccine Talk for several hours as a punishment for violating the company’s policies against misinformation. Facebook told me it was aware that the group was taken down once, and said it was a mistake.

A Facebook spokesman, Leonard Lam, told me that there was “more the company can do to support well-intentioned communities like Vaccine Talk.”

You’ll hear more from Bilowitz, along with a founder of Reddit and a famous drag performer, at the On Tech event on Thursday. I hope that you’ll join me to better understand the work of people like her who shape technology into the lived reality for the rest of us.

We also have a group chat on Slack, where you can talk with fellow readers about the changing role of technology in your life. You will get an invite to the group once you sign up for the event.

If you don’t already get this newsletter in your inbox, please sign up here.

This is what it’s like to take a power walk with a porcupine. Don’t miss this pointy pal (reluctantly) hopping up a set of stairs.

We’re hoping to learn more about who our On Tech readers are. Please fill out this short survey.