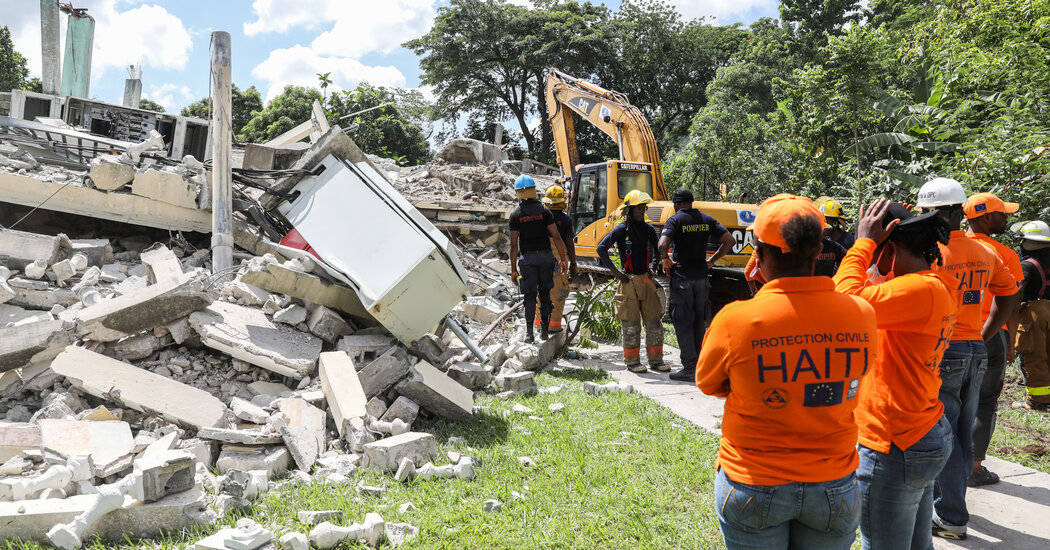 When a magnitude-7.0 earthquake hit Haiti in 2010 and killed an estimated 200,000 people, there was only one working seismometer in the country. The shaking quickly overwhelmed the seismometer, an education instrument installed at a high school, and it recorded little useful data.

Weeks passed before foreign seismic experts could travel to the disaster area, and then months passed before the portable seismometers they installed recorded enough of the fading aftershocks to shed light on the fault that had ruptured.

Last August, a magnitude-7.2 earthquake struck Haiti. Conventional seismometers installed after the 2010 quake were not functioning at the time. But several small, inexpensive instruments run by citizen scientists managed to capture the seismic waves, giving researchers a much quicker view of where the Earth had broken deep underground and demonstrating the value of enlisting the enthusiasm of curious nonexperts for science. (The earthquake’s death toll was about 2,200 people, much lower than the one in 2010, largely because the epicenter was in a more rural part of the country.)

“In 2021, we had that information in real time,” said Eric Calais, a geophysicist at the École Normale Supérieure in Paris who has studied the tectonics of the Caribbean for more than 30 years. “So that’s a big difference.”

Writing in an article published on Thursday in the journal Science, Dr. Calais and his colleagues described what the citizen science seismometers revealed about the August earthquake. About 40 miles of the same fault that caused the devastating 2010 earthquake ruptured, but farther to the west. The data also revealed some surprises, Dr. Calais said: At the eastern end of this segment, the fault was not vertical, where two tectonic plates are sliding past each other. Instead, the two plates were also being pushed together, with the northern one sliding on top of the southern one.

“If we hadn’t had the aftershock distribution, then we would not have been able to put in our models the proper full geometry,” Dr. Calais said. “Then our assessment of what went on would have been wrong.”

The Caribbean is sometimes a zone of overlooked seismic dangers with active volcanoes and earthquake faults. “The Caribbean is its own small-scale Ring of Fire,” said Susan E. Hough, a seismologist with the United States Geological Survey. “It’s like the Pacific Rim on a smaller scale.”

But the tectonic plates are crashing together at a slower pace, and major earthquakes occur less often. The second half of the 20th century was pretty quiet in the region. “People got kind of complacent about it,” Dr. Hough said. “The 2010 earthquake didn’t surprise any earthquake professionals in the world, but it surprised a lot of people that weren’t aware of the scientific results.”

Dr. Hough and Dr. Calais were two of the earthquake experts who traveled to Haiti in 2010. In the aftermath of the quake that year, international organizations provided financing to set up conventional seismometers, which cost tens of thousands of dollars each, in Haiti. When the magnitude-7.2 earthquake hit on Aug. 14, none of Haiti’s conventional seismometers were working, although a seismometer at the United States embassy was gathering data.

“It turns out to just be difficult, if not impossible, to run a conventional kind of state-of-the-art seismic network in Haiti,” Dr. Hough said. “They don’t have a functional power grid, for example, let alone reliable internet everywhere.”

Haiti remains politically unstable, suffers from widespread poverty and is vulnerable to natural disasters. The president, Jovenel Moïse, was assassinated the month before the August quake. A couple of days after the earthquake, a tropical storm, Grace, passed over the island.

In 2018, at a seismology conference in Malta, Dr. Calais met Branden Christensen, the chief executive of Raspberry Shake, a company based in Panama that combines a small, cheap computer called a Raspberry Pi with a small, cheap device used widely by the oil and natural gas industries to measure tiny ground motions, creating a seismometer that cost a few hundred dollars instead of tens of thousands of dollars.

The Raspberry Shake devices, smaller than a breadbox, can measure minute ground movements, although over a smaller range of frequencies than modern conventional seismometers can. But they do not need to be anchored to the ground and require only a power outlet and an internet connection.

“I immediately thought that the level of simplicity of the device was such that it would have a better chance of survival in the long term in Haiti, meaning no maintenance,” Dr. Calais recalled. He used some leftover grant money to buy five of them, and, with colleagues in Haiti, he started looking for volunteers who would be willing to put one in their home or office. The network has since expanded to about 15 devices.

Dr. Calais said the Haiti data shows that while the Raspberry Shakes were not as capable as conventional seismometers, they nonetheless made scientifically valuable measurements. “They are able to do the job when it comes to recording even small aftershocks,” he said.

The Raspberry Shakes, however, are not immune to Haiti’s infrastructure limitations. Only one of the three near the epicenter was operational when the main earthquake struck last August.

The instrument closest to the epicenter was offline, because the host had let his internet service lapse. But he renewed it right after he felt the shaking. “We have to accept this kind of issue,” Dr. Calais said. “Internet and power are never a given in Haiti.”

The researchers were also able to add three Raspberry Shakes to the area, and all six measured more than a thousand aftershocks that followed in the weeks afterward.

The seismic data, published online, is only part of Dr. Calais’s motivation for setting up the Raspberry Shake network. It is also meant to spread knowledge about earthquake hazards among the volunteers hosting the Raspberry Shakes and other people in Haiti.

“We want to push some people in the community to act differently,” said Steeve J. Symithe, a geophysicist at the State University of Haiti and an author of the Science paper.

Dr. Symithe, who was born in Haiti, was studying to become a civil engineer but switched fields after the 2010 earthquake, completing a doctorate at Purdue University with Dr. Calais, who was a professor there at the time.

Raspberry Shakes, which grew out of a Kickstarter project in 2016, are now installed around the world, with networks similar to Haiti’s in France, Oklahoma and Nepal. More than 1,600 devices report their data to the company’s website. “They’re popping up all over the place,” Mr. Christensen said.

Some of the research does not even involve earthquakes. In a paper published in Science in July 2020, scientists used data from 300 seismic stations, including 65 Raspberry Shakes, to observe a global quieting of noise from trains, plane, factories and a reduction of other human-made vibrations as a result of the Covid-19 pandemic.

“Without Raspberry Shake, that would have been a very hard question to answer,” Mr. Christensen said. “The reason is that most seismographs that are professional grade are installed in the mountains and places that are really quiet, far away from humans.”