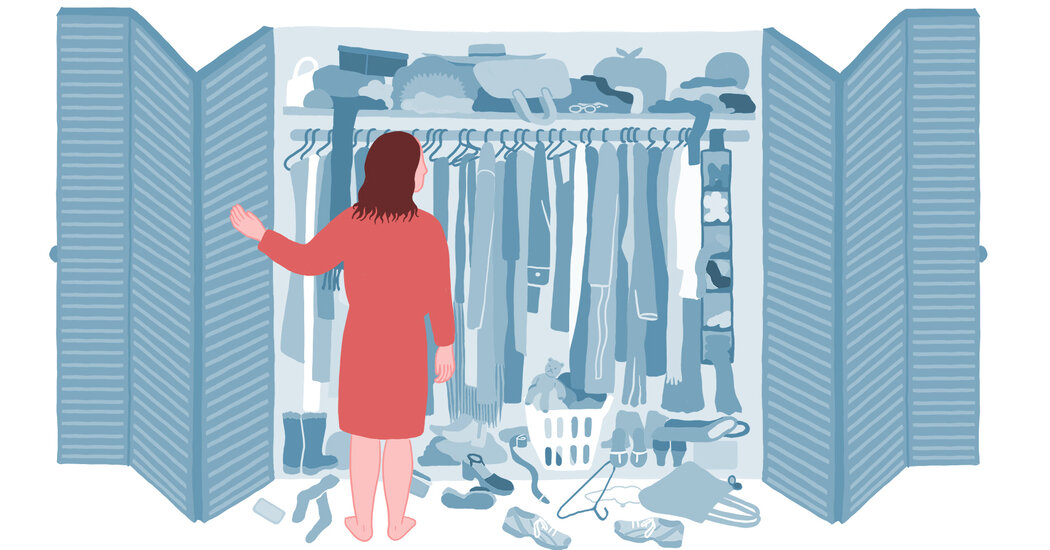 Many of us took advantage of the long, lonely hours of the 2020 Covid-19 lockdowns to cleanse our closets, drawers and cabinets of clothing from a bygone era, packaged foods long past their expiration dates and files no longer relevant. At first, I was among them and enthusiastically tackled the low-hanging fruit: ill-fitting dresses and suits, shoes I could no longer walk in, hundreds of empty plastic and glass containers.

It felt good initially, but I soon lost interest in decluttering and lacked the mental and physical energy to tackle what remained.

And, I assure you, after living in the same house for 55 years, there was a lot more to get rid of. Empty spaces have a way of filling up. I actually envy friends and neighbors who downsized and had to dispose of dumpsters full of items no longer used or useful.

But when a leaking pipe recently saturated the carpet in my finished basement, where for decades I’ve stored everything I didn’t know what to do with but couldn’t bring myself to throw out, I was thrown back into action. There’s nothing like a crisis, minor or major, to force one to come to terms with an unmanageable accumulation of stuff.

Clutter is a hazard

People like me, who fill storage areas as long as the living spaces remain orderly, do not rise to the seriousness of being a hoarder, which is considered its own psychiatric diagnosis. But clutter has its own risks. Among them are the chronic and repeated stresses that can arise, for example while searching frantically through stacks of miscellany for an important paper or racing to clear piles of junk before visitors arrive.

Not to mention risking a fall over objects left where they don’t belong. When my friend of 61 years, who can’t seem to dispose of anything, had complications from a head injury that kept him in the hospital for many weeks, his wife felt compelled to clear their apartment of untold objects lying about before his return home.

In addition, clutter is distracting, stealing attention from worthy thoughts and tasks. It saps time and energy and diminishes productivity. And, a 2015 study at St. Lawrence University found that a cluttered bedroom goes hand in hand with a poor night’s sleep.

The burden of clutter doesn’t even end when we die. When my friend Michael and his brothers cleaned out their 92-year-old mother’s house in Florida after she died, among the many multiples they found were eight identical jars of mustard, five dozen cans of pineapple chunks, 72 rolls of paper towels, 11 walkers and four wheelchairs. Costly truckloads of clutter had to be carted away. I’d like my family to have better things to fret or chuckle over when I die.

You may wonder why people like me and my friend’s mother collect so many things we likely will never need. Fear of running out is one reason I often buy in bulk, especially when desired products are on sale. A similar fear undoubtedly resulted in the frenetic run on toilet paper, pasta and canned beans at the onset of the pandemic. I never forgot what a neighbor said when, in the midst of a block party, she was asked where she kept her extra paper towels. “In the store,” she replied.

When feeling low, I’m not above indulging in retail therapy, often buying yet another bathing suit or cozy fleece to add to my extensive collection. Scott Bea, a clinical psychologist at the Cleveland Clinic, has noted that our consumer society drives many people to collect stuff they don’t need.

Some also feel compelled to hold on to the past, like a friend who keeps the programs of every event he’s attended over the last six decades. Out of guilt or sentiment, some find it hard to part with useless gifts from people they love or admire. “What if they come over one day and discover it’s gone?” is a common rationale.

I have many reasons for not parting with a long-unused item. If it’s something I long treasured, like the silverware and china my husband and I bought with our wedding gifts 46 years ago, I want to give them to someone I know will appreciate and use them. And I have a quasi-irrational fear that as soon as I dispose of something, I will find I need it.

Still, I routinely bite the bullet and donate to charities that collect clothing and household items in my neighborhood. I also live on a block with lots of pedestrian traffic and if I put giveaways — from shampoos and shoes to pots and picture frames — in front of the house, they tend to disappear within hours.

When I realized it was time to part with decades-old professional files, I enlisted the aid of a helper, instructing them not let me see anything that was being discarded from my drawers. Now to do the same with the hundreds of work-related books I’ll never open again!